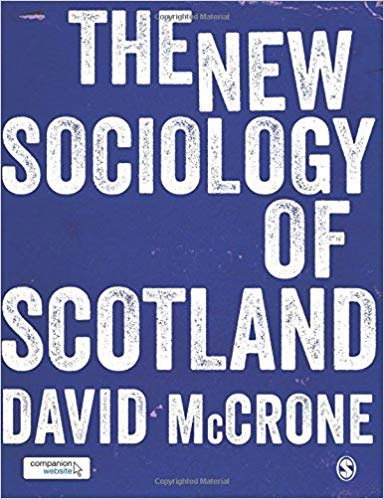 Sociologists of a certain age will recall the courses on 'The Social Structure of Modern Britain' that many of us followed as students or taught as lecturers. Most such courses have now disappeared. However, there are distinct advantages in pursuing a course that is focused on the key structures constituting a particular national society - and, of course, its global context.

Perhaps such courses are now taught mainly in those places where national identity has become a critical political issue. Scotland is a society in which these issues of national identity have always been strong and where they have acquired a particular salience in recent years. Devolution, the independence referendum, and Brexit have all ensured that the autonomy of Scotland and Scottish institutions have been important matters of political debate. It is not surprising, therefore, that Scottish society has been an important focus for teaching within Sociology Departments in Scotland.

David McCrone has produced a major new book that not only meets teaching needs for such courses but also makes a significant contribution both to substantive debates in sociology and to current political discussions. The New Sociology of Scotland (Sage Publications) brings together a wealth of material on all aspects of Scottish society, placing this in a historical context of developing national identity and a global context of Scotland's place within Britain and Britain's place within the world.

The book's first three chapters discuss the overall shape of Scottish society and problematises the ideas of 'society' and 'nation', which have often been questioned as suitable objects for sociology. The book then explores the regional and demographic character of Scotland before arriving at central chapters on power and the economy and on inequality and social class. Lindsay Paterson adds a chapter on education to complement McCrone's account of social mobility. Major chapter then follow on gender, ethnicity, and religion that pursue the identities that are alternative and complementary to class. This exploration of structurally based identities allows McCrone to proceed to consider the cultural aspects of identity and the role of history and landscape in the formation of a sense of community and national cohesion. These chapters address the central issues of identity politics that have been raised in contemporary sociology. They lead into an account of ways of representing and expressing Scottish identity in sport and the mass media. A final chapter on 'Scotland and the World' considers the implications and consequences of globalisation.

Despite its presentation as a textbook, the book is very much a self-consciously personal account, written from the basis of the author's own career within Scotland and his reflections on the future of his society. It will be an interesting and important read for all who are interested in the issues of identity, nationalism, and political self-determination, wherever they live.