The social theory produced by sociologists is often called ‘sociological theory’ and while the two terms are interchangeable, ‘social theory’ is probably preferable as the generic term.

My earliest explorations into social theory concerned Talcott Parsons, whose Structure of Social Action I studied in detail. I then undertook investigations into the theories of Louis Althusser ( Sociological Theorising and the Althusserian Ideal Sociological Analysis and Theory 1974 ) and Jurgen Habermas (Critical Social Theory: An Introduction and Critique British Journal of Sociology 1978 ). I also made some preliminary investigations into recent British social theory (Sociological Theory in Britain Sociology 1976 ).

Working with Chris Dandeker I produced a classification of approaches to social theory (The Structure of Sociological Theory and Knowledge Journal for the Theory of Social Behaviour, 1979), which Chris went on to develop with Clive Ashworth and Terry Johnson into the book The Structure of Social Theory (Macmillan, 1984).

My first book on theory was Sociological Theory (Edward Elgar, 1995, Revised edition 2012). This book concentrated on the forms of theory following from and influenced by Talcott Parsons and reviewed interactionist, systemic, structuralist, and critical forms of theory, ending with a discussion of the work of Tony Giddens, that I presented - perhaps controversially - as an interesting development of a Parsonian theoretical strategy. I subsequently set out a further commentary on Giddens in Anthony Giddens and Cultural Analysis: Absent Word and Central Concept (in Tim Edwards, ed., Cultural Theory, Sage, 2007). 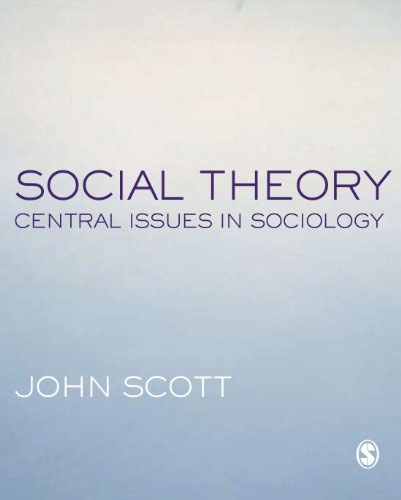 In Social Theory: Central Issues in Sociology (Sage, 2006) I tried to move away from a consideration of schools of thought and individual theorists in order to uncover the shared themes that I believed could be identified within sociological discourse. Tracing sociological debates back to the Enlightenment and considering work produced in the many diverse sociological traditions of the world, I tried to show that certain fundamental discoveries had been central to theoretical approaches and that we could identify a variety of complementary ways of exploring these and relating them to each other. Thus, I reviewed arguments about culture, system, socialisation, action, nature, and conflict that run through both ‘classical’ and contemporary social theory. A key claim was that the constant search for ‘new directions’ ignored the continuing importance of established ideas and often led to the reinvention of ideas that had been abandoned in the name of the search for novelty.

This argument was finally developed in Conceptualising the Social World. Principles of Sociological Analysis, (Cambridge University Press, 2011). In this book I concentrated on systematic exposition rather than on historical commentary and exegesis, attempting to set out a comprehensive framework of sociological analysis. I slightly reorganised the themes identified in the 2006 book and argued that sociological debates are structured by intersecting dimensions of structure, action, culture, nature, system, space, time, directionality, and mind.

I have also written specifically on the concept of social structure, arguing that although this is a much-used concept it is rarely defined or understood. My argument is that social structure must be conceptualised as comprising three elements: institutional structure, relational structure, and embodied structure. I first set this out in a conference contribution called ‘Where Is Social Structure?’ (Subsequently published in J. López and G. Potter, eds, After Postmodernism, 2001) and then developed it in a student text written with José López (Social Structure, 2000). I developed this idea further for a contribution to a volume being prepared by Håkon Leiulfsrud and Peter Sohlberg of Trondheim University, Norway, and elaborated this into a new book on Structure and Social Action.