The Palgrave Handbook of Sociology in Britain 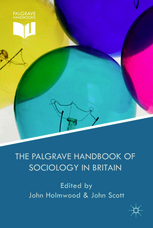 At the 2014 BSA conference, when I received my Distinguished Service to British Sociology award and we held a session to present the book, I was interviewed to give my thoughts about the past, present, and future of sociology.

Full details about the book can be found here